The Lightning and the Sun by Savitri Devi (abridged); edited by William Pierce

A classic philosophical work about the historical inevitability of cultural decay and rebirth, written by one of Adolf Hitler’s most devoted admirers. Savitri Devi couches her arguments in metaphor, using “lightning” to refer to forces of destruction and “sun” to refer to building in accordance with Nature’s eternal laws. Both are necessary, says Devi, since to build the pure and new one must first sweep away the rotting debris of the corrupt old order. The author examines in detail the lives of three figures from history: Akhnaton, Genghis Khan, and Adolf Hitler. She argues that we are at the end of a cycle of history in which corruption and lies prevail over honor and truth, and that the time is ripe for the storm of violence that will precede the next golden age. 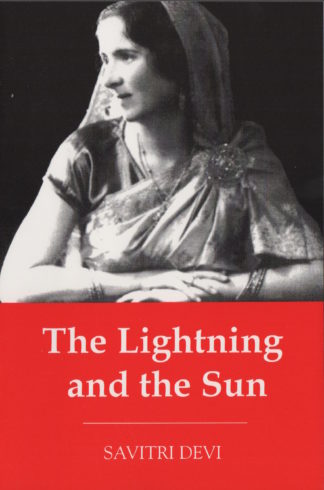 You're viewing: The Lightning and the Sun by Savitri Devi (abridged); edited by William Pierce $20.00
Add to cart