Nature’s Eternal Religion is the founding text of Creativity. It is divided into two sub-sections, which can be considered books in their own right: Book I – The Unavenged Outrage and Book II – The Salvation. The first chapter discusses nature, and what Klassen sees as nature’s laws. The second chapter states the religious belief that the White race is “Nature’s Finest.” The first book goes on to critique Christianity, including the Christian Bible. A large number of biblical stories, including the story of Adam and Eve, Jonah and the whale and the Resurrection, are ruled to be historically unlikely. The historicity of Jesus is also questioned, with the author concluding that he can find no independent evidence for the existence of the man. 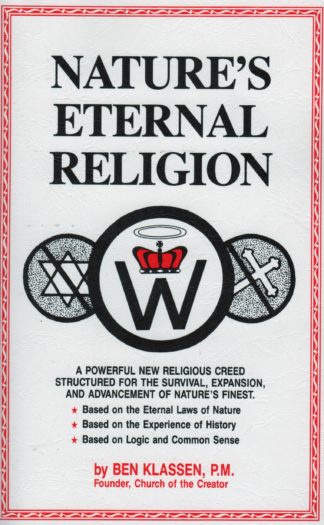