Under the heading “The Germans don’t believe us” the well known American Saturday Evening Post magazine published in its August 1946 issue an interesting article about the then existing conditions in the U.S.-occupied part of Germany. The writer of the article, Ernest O. Hauser, an editor of the magazine, had just returned from Europe where he had gained first-hand knowledge of the effects of the so-called Re-Education scheme that had been imposed upon a defeated nation by American and Allied eggheads, and other types of do-gooders.

Mr. Hauser began his article with these pregnant words: “The 18 million Germans living in the American zone of occupation are now being railroaded through an experiment in mass education of the likes of which the world has never seen (…) When the occupation ends, it is hoped, the Germans will be a friendlier nation of good neighbors whose disposition will be a lasting guarantee of peace in Europe.”

Alas, the American occupation of Germany never did end – it is still ongoing 58 years later – and we can assume that the real reason for the continued stationing of American soldiers on German soil in extra-territorial enclaves proves that many German’s still don’t believe the U.S. Government, and that they therefore cannot be trusted.

This book shows conclusively that the Re-Education scheme was a diabolical brainwashing plot directed against one of the most decent, peaceful, disciplined and hardworking people on earth. So far, the result has been devastating and soul-destroying. If continued, it would amount to planned genocide. Thankfully, there are now great changes taking place that may soon bring about a turn for the better. 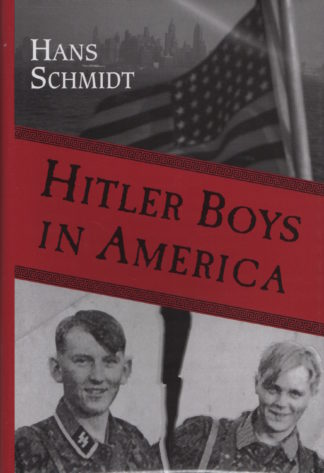 You're viewing: Hitler Boys In America by Hans Schmidt $12.00
Add to cart