The Ordeal of An American Writer

In August 1995, Hans Schmidt, a naturalized American citizen, was about to board a plane in Frankfurt, bound for his home in Florida, after having received medical treatment in Germany. But he never got passed the German border police. The 68-year-old writer was arrested and imprisoned in the fortress-like prison of Butzow.

This began the ordeal that most would think was a bygone relic of the medieval era: an independent writer is jailed because his essays and letters offended powerful forces in the international establishment, forces to which the regime in Bonn is tethered like a subservient plough horse.

Schmidt’s “crime” had not even been committed on German soil. He has written the offending periodicals and letters from his home on Pensacola. But as The New World Order extends its tentacles world-wide, national sovereignty is becoming a thing of the past. The U.S. state department refused to protest Schmidt’s arrest. He was left to rot or hopefully even to die. His heart and prostrate ailments were deliberately exacerbated by the authorities who placed him in a prison van for a marathon ride around Germany, while refusing him medical treatment.

The plan was to kill Schmidt through medical neglect or, if that failed, to prosecute him in one of Germany’s kangaroo courts (where conviction of dissidents is a foregone conclusion) and sentence him to several years in prison.

Through it all, Schmidt preserved his intolerable optimism even as the friends of free speech the world over began to mount a protest on his behalf.

Hans Schmidt tells the story of his ordeal with eloquence and aplomb. His book not only presents his legal struggle and the rigors of his imprisonment but offers profound insights into the revisionist history of the ersatz, post-war German government, formed at the point of Allied bayonets. His eye for detail, his anecdotes and his penetrating political analyses all combine to make Jailed in Democratic Germany: The Ordeal of An American Writer, both a jeremiad against totalitarian injustice, as well as a tour-de-force encounter with the case for World War Two revisionism, of which Hans Schmidt is a leading spokesman. 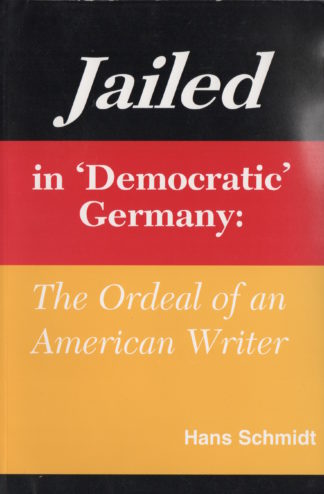 You're viewing: Jailed in Democratic Germany by Hans Schmidt $12.00
Add to cart