With Rommel in the Desert by Heinz W. Schmidt

No episode in modern warfare can match the drama and romance of the 1942-1943 North African campaign, in which its undisputed hero, even for his British adversaries, was German commander Erwin Rommel. For nearly two years, outnumbered and undersupplied, the “Desert Fox” led his celebrated Afrika Korps to one brilliant victory after another, until he was finally overwhelmed by the sheer weight of men and materiel of the combined forces of Eisenhower and Montgomery (who were enormously aided by their ability to intercept secret German battle plans). Serving at Rommel’s side throughout his desert campaigns was the book’s author, his South African-born Aide-de-Camp. Schmidt was with the legendary General from his first victories at El Agheila and Abedabia, in triumph at Tobruk, and in defeat before El Alamein. 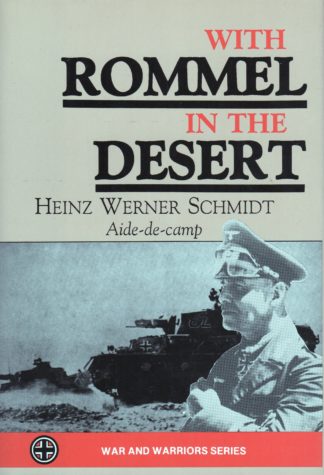 You're viewing: With Rommel in the Desert by Heinz W. Schmidt $32.00
Add to cart