On May 8, 1945 the shooting ended in Europe. But, shockingly, the war against Germany went on. Roosevelt, Stalin and Churchill had decreed that the German people must suffer-and suffer they did. Driven from their homes, looted of their property, decimated by famine and disease, raped, robbed, and enslaved, millions of Germans-most of them women and children-bore the brunt of what Time magazine called “history’s most terrifying peace”. Gruesome Harvest was one of the first books in America to sound the alarm against the victor’s postwar war against the Germans. Bristling with contemporary documentation, burning with humanitarian and patriotic outrage, this informed, riveting classic dares to tell the shameful story of how American and Allied policy makers undertook the political, economic, and social destruction of the German people even as they presumed to instruct them in “justice” and “democracy.” Today, as the propaganda war against the Germans wears on in the media and academic life, Gruesome Harvest, written in 1947 by a courageous American, when the decimation of the German race was still official U.S.-Allied policy, tells a vital story, one that must not be suppressed or forgotten. “If war should come, whichever side may claim ultimate victory, nothing is more certain that victor and vanquished alike would glean a gruesome harvest of human misery and suffering.”-Prime Minister Neville Chamberlain, July 31, 1939, to the House of Commons. 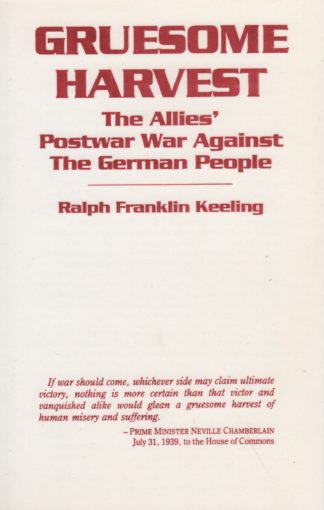