The Man Who Invented Genocide by James J. Martin

The Man Who Invented: The Public Career and Consequences of Raphael Lemkin

What significance could the unbelievably obscure academic lounge-lizard of decades ago, Raphael Lemkin, have today?

James J. Martin, commonly saddled with the title “Dean of the Revisionist Historians,” kicks open the tomb of this long-dead neologist to explore the vampiric bite he put on this world’s languages. Lemkin’s corpse turns out to be little able to withstand the strong light.

In 1943, as an act of pro-Allied academic war propaganda, this long-term floating statist spliced together a Greek prefix and a Latin suffix to coin the word which has been incanted on behalf of hyperstatism ever since. The term was the Aladdin’s Lamp which held together a cloud of fog oft-confused for a powerful djinn and so worshipped in the halls of the United Nations, half the world’s parliaments, and a near majority of the United States Senate.

There is something of a shock of heightened awareness in the discovery that this political household word was tossed off to encode a wartime propaganda charge by a free-lance civil servant on behalf of a doomed government-in-exile and on the payroll of a power-elite think tank. There was no word for race-killing before Lemkin and 1943. How did we manage without it? Think — try! — of a major international intervention or call for intervention since 1945 which did not involve a charge of genocide.

Adapted from the review by Samuel E. Konkin

Condition: New but with some foxing on edges 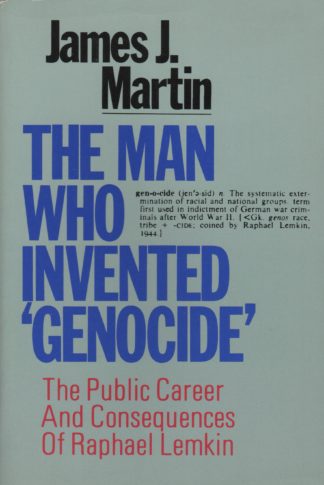 You're viewing: The Man Who Invented Genocide by James J. Martin $12.00
Add to cart