The Fame of a Dead Man’s Deeds by Robert S. Griffin

The Fame of a Dead Man’s Deeds: An Up-Close Portrait of White Nationalist William Pierce by Robert S. Griffin is about the life and ideas of perhaps the most influential and intriguing figure in the history of the White Nationalist movement in the United States and English speaking world, former university physics professor, founder of The National Alliance and author of the infamous novel The Turner Diaries, Dr. William Luther Pierce.

Griffin spent one month living on Pierce’s property in West Virginia interviewing him every evening. Pierce discusses his childhood, the people and books and events that have influenced him, his political development, his Cosmotheism, his daily routine and his vision for the future.

The book’s title his taken from a Norse poem which captures the meaning Pierce ascribes to his life.

And so must one die one’s self

But there is one thing I know which never dies

And that is the fame of a dead man’s deeds

Readers will find The Fame of a Dead Man’s Deeds engaging, accessible, ever timely, informative and thought provoking. 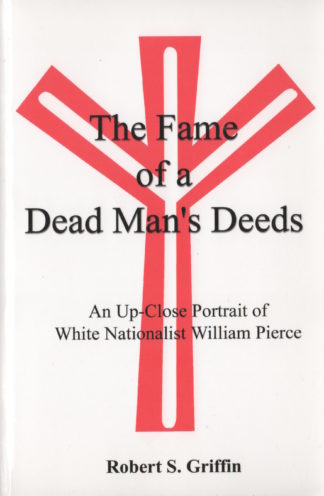