The Giant with Feet of Clay by Jürgen Graf

Raul Hilberg and his Standard Work on the ‘Holocaust’

This outstanding short study provides a merciless demolition of the central claims of the Holocaust thesis by way of a probing examination of Raul Hilberg’s canonical The Destruction of the European Jews. By narrowing his focus to those pages in Destruction that deal directly with the plans, program, method, and numerical results of the alleged Nazi mass murder of the Jews, Swiss researcher Graf relentlessly exposes the weakness and, often, absurdity of the best evidence for the extermination program, the gas chambers, and anything like the six million death toll. Giant can be devastatingly funny in its deconstruction of Hilberg’s flimsy attempts to portray mass gassing and cremation at Auschwitz and Treblinka; its focused brevity makes this book both an excellent introduction and a fine refresher course on the essentials of the revisionist case. 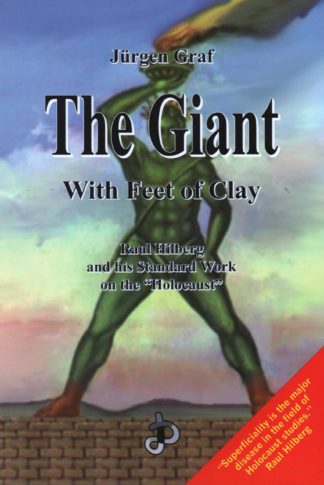 You're viewing: The Giant with Feet of Clay by Jürgen Graf $25.00
Add to cart