The Confessions of Kurt Gerstein by Henri Roques

Rezeptionsgeschichte, or “history of reception,” has been a significant concept in German literary studies in recent decades. This notion can well be extended to other lines of investigation, including the study of the documents on which political and social history is based, in conjunction with such approaches as textual analysis and criticism. In the present instance, the narratives left by the SS officer Kurt Gerstein after his death in 1945 have served for almost half a century as the chief evidence for the existence of “death-camps” at Belzec and Treblinka (and to a lesser extent Sobibor and Majdanek) in Poland, at which many millions of Jews are said to have been gassed or otherwise exterminated. In this French doctoral thesis, Henri Roques examines critically the Gerstein texts themselves, their internal consistency, their conformity to what is known from other sources, and the history of their reception down the decades (of which the story of Roques’ thesis itself forms a part). In so doing, Roques thoroughly demolishes the credibility of Gerstein’s affirmations and hence of the existence of any extermination programs at these locations. 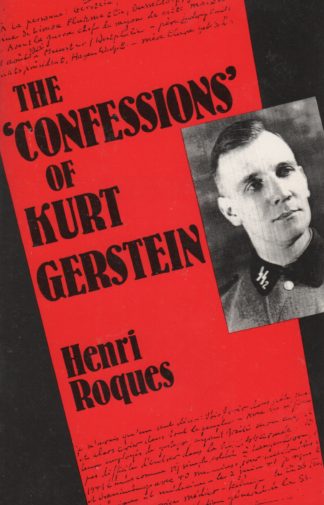 You're viewing: The Confessions of Kurt Gerstein by Henri Roques $22.00
Add to cart