The Christ Myth by Nicholas Carter

This thought-provoking book opens new ground in history. It begins with the assertion that for most of two hundred years after the death of Christ, contemporary literature contained no reference to him whatsoever. Then came the four gospels in the middle of the second century.

To understand the impact of the gospels, one must realize that with the failure of the administration of the Roman Empire, there was widespread distress. People became miserable, despondent and desperate. Partly under the influence of Eastern religions, there was a craving for a savior. Christ was thus imported into an ever-extending religious revival. Life expectation was short, death was everywhere and the only reality to which one could turn was the assurance of an afterlife in heaven or hell.

Somewhere in that chaos, around the sixth or seventh centuries, the despair crystallized in a movement, a little hurricane, which became the Catholic Church. The founders sought authority from any superstition they could find. They borrowed phrases from eastern religions, from Plato and from the Jewish Talmud. They threw together a mass of superstitious dogma, easy to impose on the ignorant masses of the time. We must recognize how astonishingly ignorant and deprived the average man was, who knew only of one mile around him, in the robber-baron age of 600 to 1400 AD. By then the Church had thoroughly incorporated the central role of Christ into its religion, and invented everything that needed to be invented in it.

This book may enable our current world to gain perspective at a time when education, particularly scientific education, has really begun to shake belief in the doctrines and superstitions of Christianity. 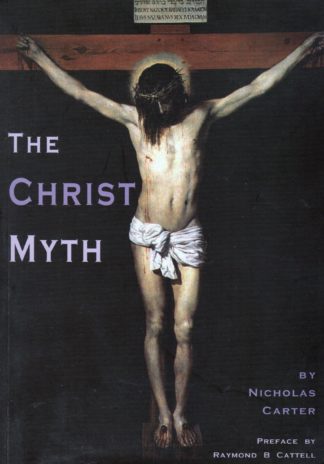 You're viewing: The Christ Myth by Nicholas Carter $25.00
Add to cart