This March 1941 book-written by a New Jersey Jewish-German émigré-caused a storm in Germany and America with its open advocacy of the physical extermination of all Germans and Germany itself. This was to be achieved through a process of mass sterilization, and the physical dismemberment of that country. Arguing that Nazism was in fact just another expression of militant Germanism, the author said that the Germans would never change and the only way to end the ongoing struggle was to end Germany and the German people. Because of Kaufman’s claimed links to the policy advisors of the American president, Nazi Propaganda Minister Joseph Goebbels used the book to help encourage Germans to fight to the last. Ironically, significant sections of Kaufman’s book, despite being dismissed as the work of a loner, came true. At least 12 million Germans were expelled from their land following the end of the war, and their deportation became the single largest transfer of any population in modern European history, and one-third of German territory was ethnically cleansed of Germans and permanently seized. Although the sterilization plan was never implemented, the collapse in the German birth rate, predicted by the author, has occurred, and even this part of the plan seems set to become reality. As the author wrote: “Of course, after complete sterilization, there will cease to be a birth rate in Germany. At the normal death rate of 2 per cent per annum, German life will diminish at the rate of 1,500,000 yearly. Accordingly, in the span of two generations that which cost millions of lives and centuries of useless effort, namely, the elimination of Germanism and its carriers, will have been an accomplished fact.” A SENSATIONAL IDEA! – Time Magazine A PLAN FOR PERMANENT PEACE AMONG CIVILIZED NATIONS! – New York Times This is an exact reproduction of the 1941 original, digitally reprocessed to the highest standards.

1 review for Germany Must Perish by Theodore N. Kaufman. 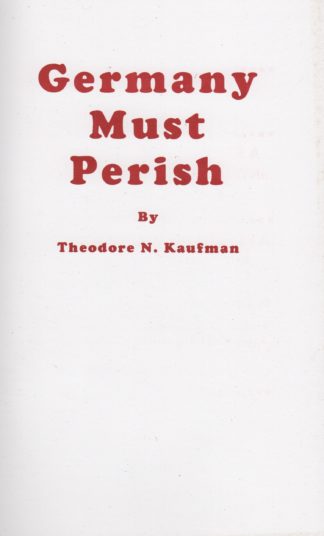