Critical Views of Jews and Judaism Through the Ages

It is common knowledge that Jews have been disliked for centuries–sometimes loathed, sometimes hated. But why? The standard reply is that anti-Semitism is a “disease” that, for some strange reason, has afflicted non-Jews for ages. But this makes little sense. Nor can it be an “irrational” reaction. Such things must have real, physical causal factors.

Our best hope for understanding this recurrent ‘anti-Semitism’ is to study the history: to look at the actual words written by prominent critics of the Jews, in context, and with an eye to any common patterns that might emerge. Such a study reveals strikingly consistent observations: Jews are seen as pernicious, conniving, shifty liars; they harbor a deep-seated hatred of humanity; they are at once foolish and arrogant; they are socially disruptive and rebellious; they are ruthless exploiters and parasites; they are master criminals–the list goes on.

The persistence of such comments is remarkable and strongly suggests that the cause for such animosity resides in the Jews themselves–in their attitudes, their values, their ethnic traits and their beliefs. It is hard to come to any other conclusion than that Jews are inclined toward actions that trigger a revulsion in non-Jews. Jews have always been, and will always be, eternal strangers.

Given this fact, we have a difficult path forward. One lesson of history is that Jews will not change; if anything, they will become better at hiding their real motives and intents. Under such conditions, many great thinkers have come to the conclusion that Jews must be separated from the rest of humanity.

Eternal Strangers is a profoundly important book. It addresses the modern-day “Jewish problem” in all its depth–something which is arguably at the root of many of the world’s social, political and economic problems. The matter is urgent; we haven’t a moment to lose. 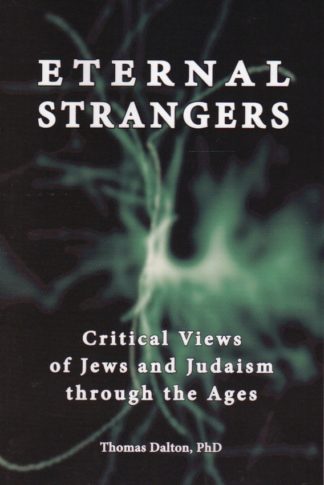 You're viewing: Eternal Strangers by Thomas Dalton $16.00
Add to cart