Passovers of Blood by Ariel Toaff

For centuries, Jews have been accused of something called “blood libel” or “ritual murder”:  the killing of non-Jews, often children, to use their blood in bizarre religious ceremonies or to make food.  As far back as 300 BC, writers have asserted that Jews sacrificed human beings in their religious practice, but it was not until the Middle Ages that such charges became the basis for civil action.  Blood libel trials resulted in many Jewish deaths.

Naturally, Jews have denied such charges.  The Bible, they said, forbids killing and prohibits the use of blood.  Anyone making such claims is merely whipping up anti-Semitism and inciting anti-Jewish action.  Even today, the mainstream view is that all such charges are mere “anti-Semitic canards” comprising a most dangerous sort of Jew-hatred.  Blood libel, say the Jews, has no basis in fact.

But is that true?  Until recently, few would have disagreed.  But then in the early 2000s, a Jewish-Italian historian, Ariel Toaff, undertook extensive research into the matter.  He concluded that not all blood libel cases could be automatically dismissed, and that certain sects of Ashkenazi Jews may well have manifested their hatred of Gentiles in a ritual use of non-Jewish blood.  Blood libel, it seems, has a substantial factual basis.

Passovers of Blood is certainly one of the most controversial books of the 21st century.  If certain Jews did—and perhaps still do—harbor an intense hatred of Gentiles, and if they did—and perhaps still do—use human blood in certain religious rituals, then this has very ominous implications for present-day relations between Jews and non-Jews around the world. 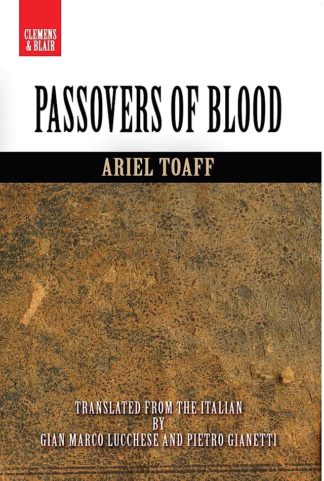 You're viewing: Passovers of Blood by Ariel Toaff $25.00
Add to cart