Cosmotheism: Religion of the Future by William Pierce

with additional works by Fred Streed and Kevin Alfred Strom.

“Deep inside all of us, in our race-soul, there is a source of divine wisdom, of ages-old wisdom, of wisdom as old as the Universe. That is the wisdom, the truth, of Cosmotheism. It is a truth of which most of us have been largely unconscious all our lives, but which now we have the opportunity to understand clearly and precisely.”

Thus William Pierce bids men and women of European race to understand ourselves and our purpose.

Dr. William Luther Pierce’s Cosmotheism is not a revealed religion, but is instead what he called a natural religion: It rejects all of the claimed supernatural “revelations” which find their way onto shining golden plates or ancient scrolls, instead having its basis in the realities of Nature that our eyes — and the investigations of science — have confirmed. In the drama of the evolution of life from non-living matter, and of higher and more conscious beings from lower forms of life, William Pierce sees a path of purpose and destiny for us.

This new, definitive book provides the reader with the only guide to Cosmotheism published by the Cosmotheist Church itself. In effect, it is the Cosmotheist bible. It contains all of William Pierce’s important Cosmotheist works, including the Cosmotheist Trilogy, his essays from internal National Alliance and Cosmotheist Community publications, and his lectures at the Community’s first gatherings in Arlington, Virginia in the 1970s. It also contains important works on the new religion by Fred Streed and Kevin Alfred Strom.

1 review for Cosmotheism: Religion of the Future by William Pierce 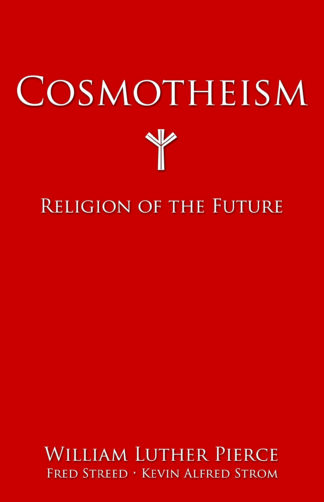 You're viewing: Cosmotheism: Religion of the Future by William Pierce $35.00
Rated 5.00 out of 5
Add to cart