Every editorial, article, and feature of lasting value in this classic, large-format, long out-of-print book is reproduced from all the original 85 tabloids, first from Attack!, then from its successor National Vanguard. With a few exceptions due to space constraints, the articles appear in chronological order and provide an outstanding picture of the first dozen years of the National Alliance organization and of the history of that period between 1970 and 1982.

Most of the tabloid issues from which this material was taken are no longer available anywhere. It is an invaluable source of factual and ideological statements tracing the development of the White resistance movement in America during the Vietnam and post-Vietnam years. BANV has been described as a “college education in 216 pages,” and, it has been said that: “If a person is capable of being radicalized, reading BANV will do it.” A copy of BANV should be in every racially conscious White’s personal library.

National Vanguard tabloid evolved into the more professional National Vanguard magazine in 1982 and eventually into the Alliance’s 21st century online magazine NationalVanguard.org that now reaches and is radicalizing millions more readers than did those original tabloids. 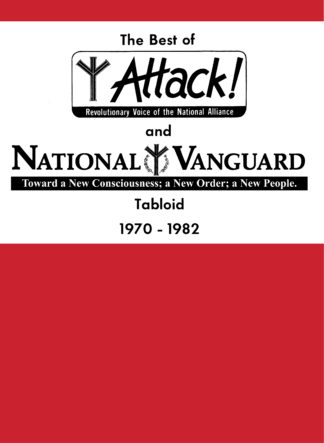 You're viewing: The Best of Attack and National Vanguard compiled by Kevin Alfred Strom $70.00
Rated 5.00 out of 5
Add to cart