In the second section, the most-important results of these studies are summarized in such a way as to making them accessible to everyone. The main arguments focus on two topics. The first concerns chemical and toxicological properties of the agent said to have been used at Auschwitz for mass murder – Zyklon B – as well as the question of whether it has left traces in the masonry of the claimed execution gas chambers which can be detected analytically to this day. The second topic deals with mass cremations of bodies in crematoria on the one hand and on pyres on the other, which are said to have been carried out outdoors. Did the crematoria of Auschwitz have the required capacity to cremate the many hundreds of thousands of victims of the claimed mass murder? Do air photos taken by Allied reconnaissance aircraft over Auschwitz in 1944 confirm witness statements reporting huge smoking pyres? Find the answers to these questions in this booklet, together with many references to source material and further reading.

The third section reports on how the establishment has reacted to these research results: initially with skepticism and curiosity, but then increasingly with censorship and persecution. At the end, this book asserts that we all must have the right and the moral obligation to peacefully resist such dictatorial suppression of scholarly research. 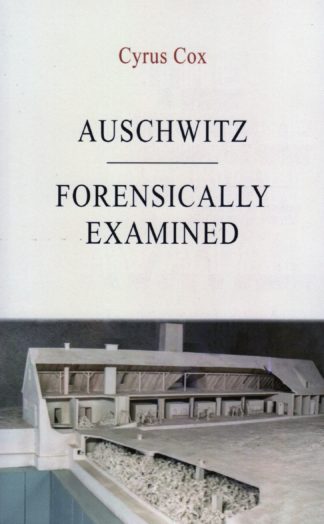