Auschwitz: A Three-Quarter Century of Propaganda Origins by Carlo Mattogno

Development and Decline of the “Gas Chamber” Propaganda Lie

During the war, wild rumors were circulating about the infamous Auschwitz Camp: that the Germans were testing new war gases there; that inmates were murdered in batches of thousands in electrocution chambers, with gas showers, or by pneumatic hammer systems; that living people were sent on conveyor belts directly into cremation furnaces; that oils, grease and soap were made of the mass-murder victims. Nothing of it was true.

When the Soviets captured Auschwitz in early 1945, they reported that inmates were killed on electrocution conveyor belts that discharged their victims directly into huge furnaces; that at least 4 million people were murdered there. That wasn’t true either.

During the immediate postwar years, “witnesses” and “experts” repeated these things and added more fantasies: that inmates were murdered with gas bombs, in gas chambers made of canvas; that the gas chambers’ floors opened downward to discharge the bodies; that carts drove both corpses and living people into the furnaces; that the crematoria of Auschwitz could have cremated 400 million victims… Again, none of it was true.

This book gives an overview of the many rumors, myths and lies about Auschwitz which mainstream historians today reject as untrue. It then explains by which ridiculous methods some claims about Auschwitz were accepted as true and turned into “history,” although they are just as untrue.

Be the first to review “Auschwitz: A Three-Quarter Century of Propaganda Origins by Carlo Mattogno” Cancel reply 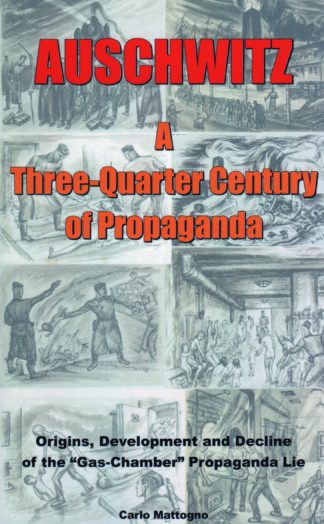 You're viewing: Auschwitz: A Three-Quarter Century of Propaganda Origins by Carlo Mattogno $12.00
Add to cart