View cart “Rosenberg’s The Myth of the 20th Century edited by Thomas Dalton” has been added to your cart.

Widely regarded as the second most-important book to come out of National Socialist Germany (after Mein Kampf), Alfred Rosenberg’s The Myth of the 20th Century stands as a monumental work of social and political philosophy. Originally published in 1930 and then revised in 1937, this book lays out a comprehensive vision of the emerging racially-oriented German state. The “myth” is the Myth of the Blood: the idea that race or genetics is the proper founding principle of the modern state, and that the purpose of the state is to serve and protect its majority race. This was actually a very ancient concept, one that was lost in the late modern era but rediscovered by Hitler, Rosenberg, and other leading National Socialists.

Rosenberg’s penetrating analysis covers a vast range of scholarly topics: Greek, Nordic, and German mythology; ancient literature; Western and Eastern theology; the unique qualities of Judaism; philosophy of science; metaphysics; art and aesthetics; feminism; capitalism; Marxism-and much more. More than any other single work, Myth of the 20th Century presents the ideological foundations of the new Germany, and offers a comprehensive worldview to serve as a guiding image.

As with Mein Kampf and other important works of that era, this book has never received proper treatment in an English translation, until now. The new Dalton edition presents a modernized and reworked translation that reads beautifully in contemporary English. The long text has been broken up by section headings drawn from the German original. Helpful footnotes and in-text citations add much to the clarity of the work. Finally, this edition includes a useful bibliography and detailed index. The Dalton edition will become the standard English version for years to come.

Rosenberg’s intellectual vigor, immense learning, and strength of vision are striking-even today, nearly a century later. This book is essential to any proper understanding of the National Socialist era. 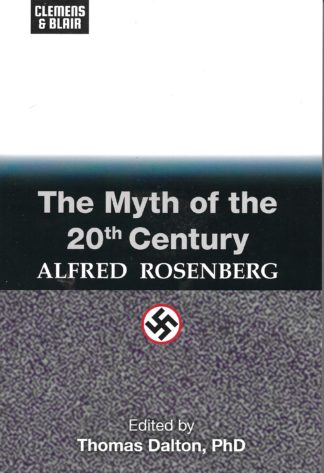 You're viewing: Rosenberg’s The Myth of the 20th Century edited by Thomas Dalton $32.00
Add to cart