Lenin on the Train by Catherine Merridale (Hardback)

A gripping, meticulously researched account of Lenin’s fateful 1917 rail journey from Zurich to Petrograd, where he ignited the Russian Revolution and forever changed the world

In April 1917, as the Russian Tsar Nicholas II’s abdication sent shockwaves across war-torn Europe, the future leader of the Bolshevik revolution Vladimir Lenin was far away, exiled in Zurich. When the news reached him, Lenin immediately resolved to return to Petrograd and lead the revolt. But to get there, he would have to cross Germany, which meant accepting help from the deadliest of Russia’s adversaries. Millions of Russians at home were suffering as a result of German aggression, and to accept German aid―or even safe passage―would be to betray his homeland. Germany, for its part, saw an opportunity to further destabilize Russia by allowing Lenin and his small group of revolutionaries to return.

Now, in Lenin on the Train, drawing on a dazzling array of sources and never-before-seen archival material, renowned historian Catherine Merridale provides a riveting, nuanced account of this enormously consequential journey―the train ride that changed the world―as well as the underground conspiracy and subterfuge that went into making it happen. Writing with the same insight and formidable intelligence that distinguished her earlier works, she brings to life a world of counter-espionage and intrigue, wartime desperation, illicit finance, and misguided utopianism.

When Lenin arrived in Petrograd’s now-famous Finland Station, he delivered an explosive address to the impassioned crowds. Simple and extreme, the text of this speech has been compared to such momentous documents as Constantine’s edict of Milan and Martin Luther’s ninety-five theses. It was the moment when the Russian revolution became Soviet, the genesis of a system of tyranny and faith that changed the course of Russia’s history forever and transformed the international political climate. 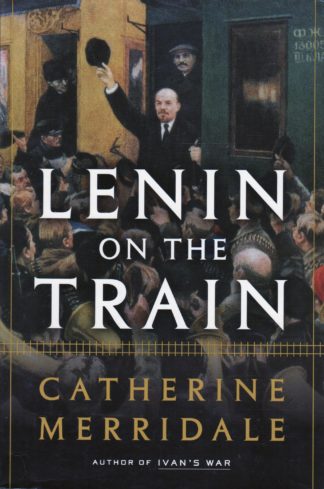 You're viewing: Lenin on the Train by Catherine Merridale (Hardback) $15.00
Add to cart