Essays on a Modern Witch-Hunt:

What happens if a scientist touches the “third rail” of western societies, that is to say, violates the only taboo left standing? Does free speech prevail? Read this book, and you will find out that the answer is: NO!

Germar Rudolf, born in Germany in 1964, was a promising young scientist preparing his PhD thesis at a Max Planck Institute in Germany in the early 1990s when he was asked by a lawyer to conduct forensic research on whether or not the Nazis used gas chambers to mass murder people at Auschwitz. Rudolf found the evidence wanting, but saying so in his expert report and as an expert witness in court led to relentless retaliation by the authorities and mass media of his native country: He lost his job, had his final PhD exam denied, was vilified by the mass media, thrown out of his apartments, had his home searched by the police several times, and was eventually sentenced to 14 months’ imprisonment for his research results during a trial where he was denied all opportunity to prove that his research was correct.

Facing a cascade of further prosecutions for his ongoing research into this matter, he eventually fled his home country and tried to find a safe haven first in Spain, then in England, and finally in the United States. But no matter where he showed up, he found himself again hunted for his controversial, yet peaceful scientific publications. Even the U.S., where he applied for political asylum, denied him due process and shipped him right back to Germany, where he was again put on trial for his activities as a science publisher. Although his activities outside Germany had been perfectly legal in those places, the German court nevertheless sentenced Rudolf to thirty more months in prison for them. They even threatened him that, if he dared defend himself, he’d be prosecuted for this as well.

In the present book, Rudolf, who once firmly believed in the orthodox Holocaust narrative, explains what brought him to doubt it, and why he ventured into a research field where those who cast doubt on mainstream views are ostracized, marginalized, persecuted and in many countries even thrown in jail, as he was. In several autobiographical essays, Rudolf tells the gripping story of his twenty-year struggle against governments the world over trying to silence him with almost any means. He explains how the existing legal framework in Germany provides for far-reaching covert government censorship and the staging of political show trials. There are, for instance, no transcripts of proceedings in German courts, an appeal of many court decisions is impossible, and filing a motion to introduce exonerating evidence is deemed a crime in certain cases! Germany’s police have a dedicated “state protection” branch going after political dissidents, and German censorship law allows banning and confiscating anything the government declares a threat to “public peace.”

Learn here what America’s future could look like if the First Amendment ever fails to stop its politicians from committing similar crimes. 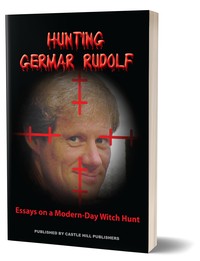