The Hindu-Aryan Myth, and Neo-Nazism

In this window onto the roots and evolution of international neo-Nazism, Nicholas Goodrick-Clarke reveals the powerful impact of one of fascism’s most creative minds – Savitri Devi.

Savitri Devi’s influence on neo-Nazism and other hybrid strains of mystical fascism has been continuous since the mid-1960s. A Frenchwoman of Greek-English birth, Devi became an admirer of German National Socialism in the late 1920s. Deeply impressed by its racial heritage and caste-system, she emigrated to India, where she developed her racial ideology, in the early 1930s. Her works have been reissued and distributed through various neo-Nazi networks and she has been lionized as a foremother of Nazi ideology. Her appeal to neo-Nazi sects lies in the very eccentricity of her thought – combining Aryan supremacism and anti-Semitism with Hinduism, social Darwinism, animal rights, and a fundamentally biocentric view of life – and has resulted in curious, yet potent alliances in radical ideology.

As one of the earliest Holocaust deniers and the first to suggest that Adolf Hitler was an avatar– a god come to earth in human form to restore the world to a golden age – Devi became a fixture in the shadowy neo-Nazi world. In Hitler’s Priestess, Nicholas Goodrick-Clarke examines how someone with so little tangible connection to Nazi Germany became such a powerful advocate of Hitler’s misanthropy. 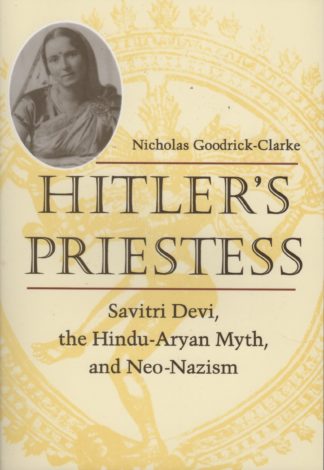