Give Us This Day by Sidney Stewart

What happened to the survivors of the infamous Bataan Death March in World War II? In a new edition of this classic account, Sidney Stewart gives one man’s gripping answer.

In April 1942, Sidney Stewart, a 21-year-old U.S. Army enlisted man, was captured at Bataan. For nearly three and a half years, until he was liberated by the Russians in Manchuria, he remained a prisoner of war. Here is his account of this long and terrifying captivity. “It is one of the most harrowing and debilitating chronicles that I have read. . .. He describes the ordeal brilliantly; he harbors no resentments apparently, and he has emerged from an inferno of bestiality with utter serenity.” ― Maxwell Geismar, Saturday Review “An impressive and moving book.” ― David Dempsey, New York Times “His is no ordinary prisoner-of-war story; better written than most, it contains no tales of swashbuckling defiance. . .. The force of this book is its testimony to the indomitable strength of the human spirit.” ― Manchester Guardian “The plain narrative of this story would by itself have been fascinating, but this book is far more than a story, it is a work of art.” ― André Siegfried, Académie Francoise “Sidney Stewart’s composed narrative is one of the most noble documents ever penned by a prisoner of war. The companions he writes about remained men to the end, until at last only one man remained; he survived to write this unforgettable, this magnificent story.” ― George Slocombe, New York Herald Tribune [Paris] 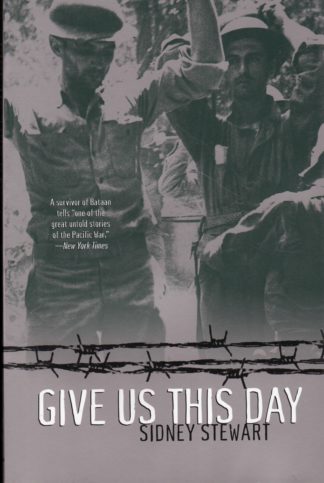 You're viewing: Give Us This Day by Sidney Stewart $6.00
Add to cart