Debating the Holocaust by Thomas Dalton

A New Look at Both Sides.

For the past few decades there has been raging a kind of subterranean debate, one of monumental importance. It is a debate about the Holocaust – not whether or not it “happened” (this is a meaningless claim), but rather, how it happened, through what means, and to what extent. On the one hand we have the traditional, orthodox view: the six million Jewish casualties, the gas chambers, the cremation ovens and mass graves. On the other hand, there is a small, renegade band of writers and researchers who refuse to accept large parts of this story. These revisionists, as they call themselves, present counter-evidence and ask tough questions. Among the issues they raise are these:

There is no trace of a ‘Hitler order’ to exterminate the Jews; key witnesses have either falsified or greatly exaggerated important aspects of their stories; major death camps – Belzec, Chelmno, Sobibor, and Treblinka – have all but vanished; we find little evidence of disturbed earth for mass graves; we find few remains of the millions of alleged victims – neither bones nor ash; mass-gassing with Zyklon-B would be nearly impossible without ventilators and ceiling holes; mass-gassing with diesel engine exhaust is practically impossible, given the low level of carbon monoxide; wartime air photos of Auschwitz show none of the alleged mass-burnings or cremations; the ‘6 million’ number has no basis in fact, and actually traces back decades before the war; trends in Jewish world population strongly suggest less than 6 million lost; and the present number of “survivors” – currently over 1 million – implies few wartime deaths.

The revisionists arrive at a different account. Hitler, they say, wanted to expel the Jews, not kill them. The ghettos and concentration camps served primarily for ethnic cleansing and forced labor, not mass murder. The Zyklon gas chambers did in fact exist, but were used for delousing and sanitary purposes. And most important, the Jewish death toll was much lower than commonly assumed – on the order of 500,000.

In this book, for the FIRST TIME EVER, the reader can now judge for himself. Arguments and counter-arguments for both sides are presented, and all relevant facts are laid out in a clear and concise manner. The entire debate is presented in a scholarly and non-polemical fashion. Citations are marked, and facts are checked. READ, and JUDGE FOR YOURSELF. 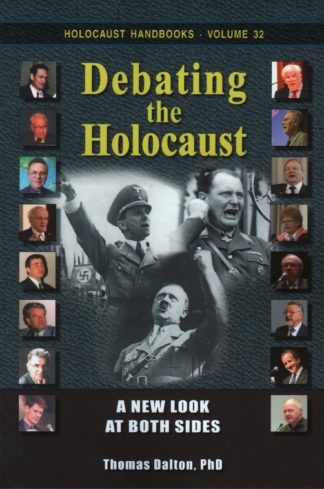 You're viewing: Debating the Holocaust by Thomas Dalton $30.00
Add to cart