For much of the year, Don Douglas had Topsail Island State Park pretty much to himself because his father was its superintendent. On this wild, unspoiled stretch of beach and dune along the New Jersey coast, Don combined his interest in bird watching with the doctor’s orders to exercise his leg, once paralyzed by polio. Topsail Island was a stopping place for many species of sea and shore birds during the great spring and fall migrations. During the long weekend hikes, when he made notes on the birds he saw, Don soon found he was also making observations of a different nature: strange visitors coming to the island, bones and coins found along the beach. Was it true that Captain Kidd’s treasure was buried on Topsail Island, as some people believed? Were the yellowed manuscript and old maps that supposedly proved this simply part of a clever hoax? Before Don could answer these questions, he found himself deeply involved in mysterious events that led eventually to a dramatic climax. Long known as a leading writer for boys, Stephen W. Meader has happily blended intrigue and suspense with the ever-changing phenomena of nature into a genuinely absorbing story. 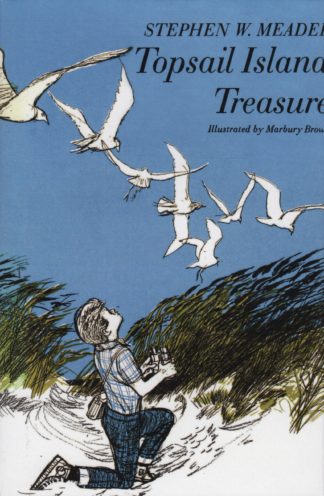