When Rick Landon and his family moved from a crowded big-city tenement district to a remote island off the North Carolina coast, he found himself in a strange new world. The tiny village of Ocracoke was different from anything Rick had known, and at first he hated it. Then slowly he began to change his mind as he got to know the friendly young people there. The seasons of the year raced by, filled with new experiences—learning about the many sea birds that made the island their home, fishing and hunting, exploring the beaches in all kinds of weather, battling wild hurricanes that swept the tiny island from time to time in the winter months—but most fascinating of all was studying the ways of the wild ponies that roamed the island, and, as a member of the mounted Boy Scout troop, breaking and riding the beautiful palomino colt, Dandelion. Wild Pony Island is Mr. Meader’s thirty-fourth book, and it is one of his most exciting and unusual stories. Written out of firsthand experience on the island and with a special love of sea and shore, it will give readers of all ages a vivid picture of a boy growing up in a beautiful and unspoiled part of our country. 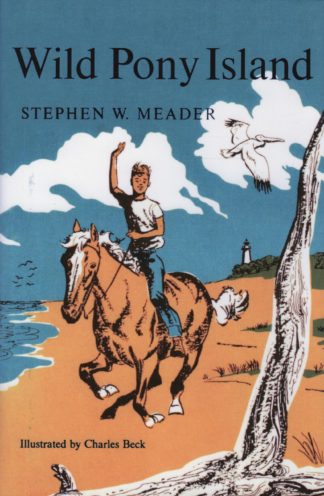