The Jewish Hand in the World Wars by Thomas Dalton

For many centuries, Jews have had a negative reputation in many countries and among large parts of the population. The reasons given for this are plentiful, ranging from their anti-Christian theology and social exclusivity to arrogance, conceit, greed and maliciousness. Their perceived belli­gerence and animosity have been considered legendary. But less well known is their involvement in war-hence the reason for this book.

When we examine the causal factors for war, and when we look at its primary beneficiaries, we repeatedly find a prominent Jewish presence. Throughout history, Jews have played an exceptionally active role in promoting and inciting war. With their long-notorious influence in government, we find recurrent instances of Jews promoting hardline stances, being uncompromising, and actively inciting people to hatred. Jewish misanthropy, rooted in Old Testament mandates, and combined with a ruthless materialism, has led them, time and again, to instigate warfare if it served their larger interests. This fact explains much about the present-day world.

In this book, Thomas Dalton examines in detail the Jewish hand in the two world wars. Along the way, he dissects Jewish motives and Jewish strategies for maximizing gain amidst warfare, reaching back centuries. He concludes with a brief analysis of more recent wars, and with a look to the future.

We cannot prevent war until we acknowledge its causes. Some of these causes are rooted in human nature, but others are very deliberate, very strategic actions by a malicious few. The Jewish Hand in the World Wars sheds some badly needed light on this entire question. 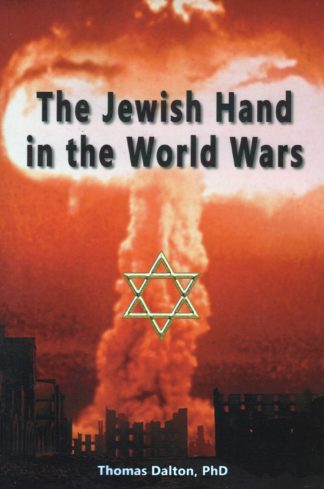 You're viewing: The Jewish Hand in the World Wars by Thomas Dalton $22.00
Add to cart