A new English translation of the classic work by Adolf Hitler. This edition brings together the best, timeliest, and most interesting passages from the original two-volume work. It includes a detailed Introduction, section headings, helpful footnotes, bibliography, and a useful index.

Mein Kampf is the autobiography and articulated worldview of one of the most consequential leaders in world history. It is also one of the most maligned and least understood texts of the 20th century. A major problem in the Anglophone world has been the poor state of English translations. The new Dalton translation is clear, lucid, and highly readable–and yet true to the original. Unlike every other edition, this version has authentic section headings embedded in the text, which serve to both organize Hitler’s ideas and to parse long sections of text into manageable units. Finally, this edition edits out the long tangents and ancillary comments that would only be of interest to academic historians.

The Essential Mein Kampf captures the ‘best of the best, ‘ and presents it in modern, highly-readable English. A truly compelling read, as relevant today as when it was written 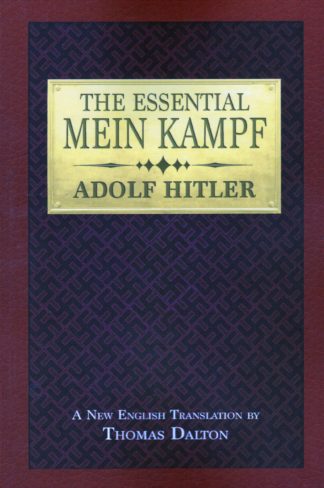 You're viewing: The Essential Mein Kampf by Adolf Hitler – edited by Thomas Dalton $20.00
Add to cart