The Einsatzgruppen in the Occupied Eastern Territories (Hard Cover) by Carlo

On 22 June 1941, National-Socialist Germany set out to destroy what it saw as a menace to the world: Judeo-Bolshevism in its most threatening manifestation, the Soviet Union. As the German Army marched east, certain special units called Einsatzgruppen (task forces) were deployed behind the front. Mainstream historians maintain that their primary task was to exterminate as many Jews as possible. This study takes a critical look at the Einsatzgruppen’s activities and missions. Authentic documents exist attesting to mass executions of Jews in the temporarily German-occupied Soviet territories, but accuracy of the data contained in them is questionable, as mainstream scholars admit. Unlike all other works published so far on this topic, revisionist historian Mattogno analyzes with a critical mind and a common-sense approach the information available about the Einsatzgruppen’s killings as well as the claimed attempts of German units to erase the traces of these crimes. 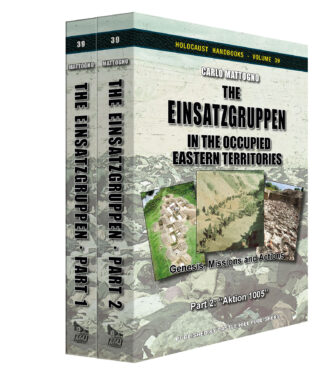 You're viewing: The Einsatzgruppen in the Occupied Eastern Territories (Hard Cover) by Carlo $65.00
Add to cart