The Biocentric Worldview by Ludwig Klages and Joseph D. Pryce

This book is a selection of essays and poems by the German philosopher and psychologist, Ludwig Klages. He was a fierce critic of what he saw as the lack of quality in the modern world, which he held to be a product of the false ideas and belief systems of our times. For Klages, the world is divided between forces and ideas that enhance life in all its vigor (such as those of Nietzsche), and those which oppose life by reducing it to mere materialism, and by portraying it as something to be shunned as innately corrupt and evil (such as modern religion). To overcome the life-denying forces, Klages calls for a return to the pagan view of life, and to a direct relationship between humanity and the natural world, and opposition to the destruction of nature by the agents of progress. He also opposed the distortions and falsehoods which he claimed were being propagated by psychoanalysis. “Those who confidently predict the end of all life and the ultimate doom of the cosmos are mere swindlers, Klages assures us. Those who cannot successfully predict such mundane trivialities as next season’s fashions in hemlines or the trends in popular music five years down the road can hardly expect to be taken seriously as prophets who can foretell the ultimate fate of the entire universe!” – From the Introduction by Joseph D. Pryce Ludwig Klages (1872-1956) has become one of the twentieth century’s most unjustly neglected thinkers. Born in Hanover, Germany, in his youth he was one of the founders of the Cosmic Circle in Munich, which was centered on the ideas and poetry of Stefan George. He went on to become an important critic of the trends in philosophy, psychology and society of his day, and was often praised even by his adversaries. Klages rejected the modern world that he saw in development, calling instead for a renewal of civilization based upon the ideas of ancient Greece and German Romanticism. Klages was also responsible for making the unconscious the focus of modern psychology, and for introducing such terms as the “Id” and the introvert-extrovert scale to the discipline, although others were destined to take credit for these discoveries. He was honored by the German government with a Festschrift in conjunction with his 80th birthday. 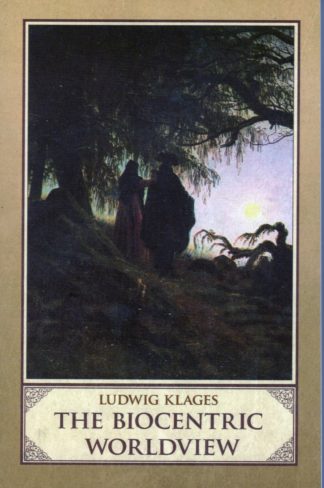 You're viewing: The Biocentric Worldview by Ludwig Klages and Joseph D. Pryce $24.00
Add to cart