Lieutenant Hornblower, in this Volume 2 of the Hornblower Saga, tells these stories of Hornblower’s exploits through the eyes of Lieutenant Bush. A tyrannical, obsessed, and eventually crazy Captain falls, or is helped, through a hatch while chasing suspected mutineers, of which the other officers may be ringleaders. Upon the incapacity of the Captain, Hornblower, even though the most junior lieutenant, suggests and directs shore invasions in the West Indies, captures enemy ships, and recovers escaped Spanish crews. Upon his name being cleared at a court martial, Hornblower is of course commended for his successes and sent home to England with dispatches as the captain (as Commander) of one of the prizes he was responsible for capturing. With this view of Hornblower through Bush’s eyes we enjoy discovering more about these two characters and their very different personalities. 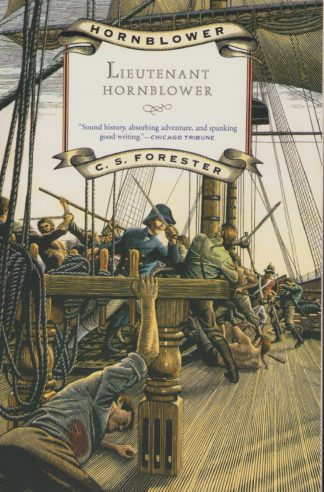 You're viewing: Lieutenant Hornblower by C.S. Forester’s $10.00
Add to cart