View cart “Hitler Boys In America by Hans Schmidt” has been added to your cart.

The is the 2002, 990-page millennium edition with scores of rare photographs, many in color.

Using information gleaned from German military records and archives, as well as from the unpublished diaries, notes and correspondence of the Reich’s top ministers, noted historian David Irving explores the strategies, objectives and execution of Hitler’s War from the breathtaking and often surprising perspective of Adolf Hitler himself. This shocking, controversial best seller stunned the European continent with its startling revelations about Germany’s ultimate dictator. It is unique among biographies in its method of describing an event–WWII as through the eyes of one of the dictators himself. “What Hitler did not order, or did not learn, does not figure in this book,” explains the author. “The narrative of events unfolds in the precise sequence that Hitler himself became involved in them.” For instance, the first that the reader knows of a plot against Hitler’s life is when Count von Stauffenberg’s bomb explodes beneath the table at the Fuehrer’s headquarters. It is an unusual technique, but it works. The book sold 25,000 copies in its first UK hardback edition, and it was often reprinted (Macmillan, Ltd.) and translated. It became an approved reference work at West Point and Sandhurst, and it figures prominently in university libraries around the world, because it quotes documents that other historians have failed to find. In 1991 Focal Point, an imprint founded in 1980, published a new Deluxe edition, updated and including The War Path, the narrative of Hitler’s prewar years. Mr. Irving’s other publications had by then come under a systematic campaign of attack. In July 1992, on the day after he returned from Moscow bringing the unpublished Goebbels diaries from the former Soviet archives, Macmillan’s capitulated and secretly ordered all stocks of his books burned. Libraries came under pressure to pull his books from their shelves. Italian, French, Spanish and Scandinavian publishers were prevailed upon not to release their editions of the book. The 1991 Focal Point edition incorporated all the latest archival finds, including the diaries of Hermann Goering and Hitler’s notorious doctor Morell, and for the first-time dramatic color photographs taken by Hitler’s cameraman Walter Frentz. This new edition is further updated with evidence including the long-lost Gestapo interrogations of Rudolf Hess’s staff, now in private hands, and signals intercepted by British codebreakers. 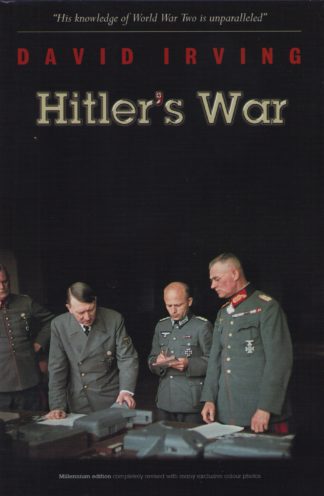 You're viewing: Hitler’s War and the War Path by David Irving [Hardcover – Illustrated] $200.00
Add to cart