Will Vaccines Be The End Of Us by John Massaro

Vaccines are experimental blends of biological and chemical junk that don’t work and have maimed or killed an uncountable number of people. The big lie that they have “saved millions of lives” has been repeated so often and for so long that most consider it the indisputable truth. Yet any serious investigation will reveal that there are no vaccination success stories, only myths taught in medical universities and served to the public by the fake news establishment, both of which have strong financial ties with the big pharmaceutical firms that manufacture vaccines. Since 1796, when it all started, thoughtful people have emphatically condemned the procedure and exposed its dark underside. And now, with the Covid-19 hoax, the criminals who develop and promote vaccines are trying to force the most dangerous “medicine” ever invented on the entire world. As a result, we may be living on the brink of an unthinkable human tragedy. Massaro delves into taboo topics that many would find offensive, including race, religion, even the Jewish Question and that other big lie: the Holocaust.

“The title of this book asks if vaccines will be the end of us. A corollary question would be, ‘Will Jews be the end of us?’… it’s something that thoughtful men through the ages have pondered. The late William Pierce, founder of the National Alliance, a racial nationalist organization still in operation despite several setbacks, pondered it long and hard.”… Pierce believed that the conflict between Jew and Aryan man was a battle of Nature beyond any moral considerations, such as takes place throughout the plant and animal kingdom, and ultimately one or the other will be ultimately killed off.” -John Massaro, page 244 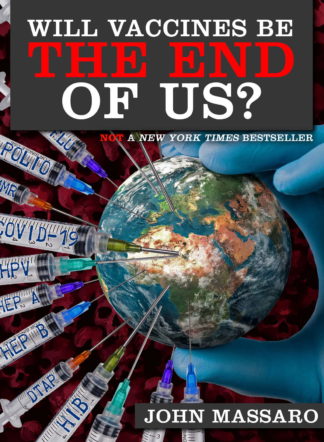 You're viewing: Will Vaccines Be The End Of Us by John Massaro $25.00
Add to cart