The First Holocaust by Don Heddesheimer

Six million Jews in Poland and Russia threatened with imminent holocaust: this allegation was appearing in such sources as “The New York Times” — but the year was 1919! Don Heddesheimer’s compact but substantive “First Holocaust” documents post-WWI propaganda that claimed East European Jewry was on the brink of annihilation, regularly invoking the talismanic six million figure. It gives details how that propaganda was used to agitate for minority rights for Jews in Poland, and for Zionism and Bolshevism in Poland and Russia; and demonstrates how Jewish fundraising operations in America raised vast sums in the name of feeding Polish and Russian Jews, then funneled much of the money to Zionist and Communist “constructive undertakings” — including banks, unions, and kibbutzes — rather than to starving Jews. “The First Holocaust,” which includes eye-opening testimony from American diplomats and military attachés stationed in Poland and Russia that contradicted Jewish persecution claims, is a valuable study of American Jewish institutional operations at a fateful juncture in Jewish and European history, an incisive examination of a cunningly contrived campaign of atrocity and extermination propaganda, two decades before the alleged WWII Holocaust. 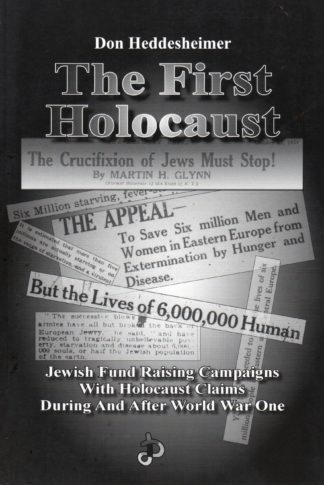 You're viewing: The First Holocaust by Don Heddesheimer $18.00
Add to cart