View cart “Gods and Myths of Northern Europe by H.R. Ellis Davidson” has been added to your cart.

Scipio Africanus: Greater Than Napoleon by B. H. Liddell Hart

Scipio Africanus (236-183 B.C.) was one of the most exciting and dynamic leaders in history. As commander he never lost a battle. Yet it is his adversary, Hannibal, who has lived on in the public memory, due mostly to his daring march through the Alps with his elephants. At the Battle of the Ticinus, Hannibal’s initial encounter with Roman arms, young Scipio first tasted warfare, rescuing his dangerously wounded, encircled father, who was also the Roman commander. By nineteen Scipio was the equivalent of a staff colonel and in 210 B.C. he was placed in supreme command. In three years, he destroyed Carthaginian power in Spain and, after being made consul, took his forces to Africa, where he conquered Carthage’s great ally, Syphax. Two years later he clashed with Hannibal himself, annihilating his army in the decisive Battle of Zama. For this triumph and his other exploits in the Punic Wars, Scipio was awarded the title Africanus. In his fascinating portrait of this extraordinary commander, B. H. Liddell Hart writes, “The age of generalship does not age, and it is because Scipio’s battles are richer in stratagems and ruses — many still feasible today — than those of any other commander in history that they are an unfailing object lesson.” Not only military enthusiasts and historians but all those interested in outstanding men will find this magnificent study absorbing and gripping. 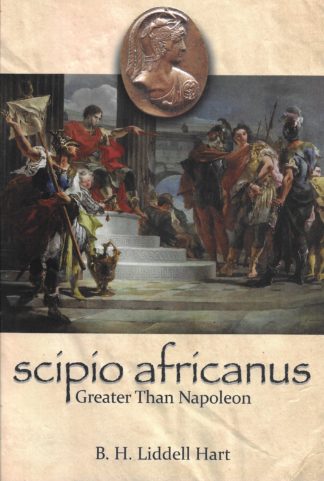 You're viewing: Scipio Africanus: Greater Than Napoleon by B. H. Liddell Hart $25.00
Add to cart