Of the many speeches made by Adolf Hitler during his lifetime, certainly one of the most important was his address of April 28, 1939. It was also very probably the most eagerly anticipated and closely followed speech of the time, with many millions of people around the world listening to it on radio or reading of it the next day in newspapers. It’s also been regarded, even by some of his fiercest critics, as perhaps his most impressive address ever. It was a response to a much-publicized message from American President Franklin Roosevelt, who had called on the German Chancellor to promise not to attack 31 countries.

The historic exchange between Roosevelt and Hitler is still important in helping to better understand the foreign policy outlook and goals of those two influential twentieth-century leaders, and how very differently each viewed recent history and his own country’s role in the world.

Here is the full text of Roosevelt’s April 1939 message to Hitler, followed by a specially prepared translation of the complete text of the address by the German leader in response. A foreword by American historian Mark Weber puts the exchange in contemporary and historical perspective. Endnotes have been added to provide context and to help clarify unfamiliar references, along with a list of books and articles for suggested further reading. 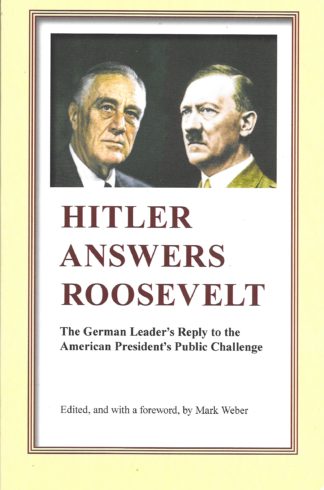