History of Flight Coloring Book by A. G. Smith

This exciting coloring book — the first of its kind — chronicles the amazing story of man-made flying machines. A. G. Smith’s carefully rendered illustrations trace the history of aircraft, beginning with Leonardo da Vinci’s design for the wing-flapping ornithopter, continuing with eighteenth-century hot-air balloons and nineteenth-century dirigibles, and concluding with such twentieth-century heavier-than-air craft as helicopters, jet fighters, and the space shuttle.

Forty-seven precise line drawings include: the history-making Wright Brothers’ Flyer (1903); the spunky World War II British Spitfire; the Messerschmitt ME 262 A, the first German jet (1945); the Bell X-1, the first manned aircraft to exceed the speed of sound (1947); and the Concorde Supersonic Transport, developed jointly by the French and the English (1969). An informative caption describes each craft — its innovative design, functions, and military or historic role.

Educational as well as entertaining, this well-researched pictorial display is sure to please colorists of all ages as certainly as it will thrill anyone fascinated with man’s conquest of the air. 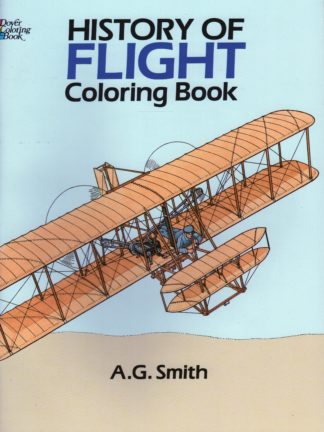 You're viewing: History of Flight Coloring Book by A. G. Smith $6.00
Add to cart