A Race Against Time edited by George McDaniel

Racial Heresies for the 21st Century. Forward by Jared Taylor

Since the 1960s, every pillar of American society has passionately supported the goal of eliminating “racism.” The belief that all races are identical or interchangeable in terms of average ability and capacity for high civilization has become the equivalent of a state religion.

Nevertheless, residential neighborhoods remain nearly as segregated as they were in the 1960s. Church congregations are segregated. Generation after generation, school children fail the “lunch-room test” by sitting with friends of the same race. Americans know that the constant cheerleading for integration and “diversity” masks deep divisions. Outside of a few pockets of self-conscious mixing, Americans generally live their lives among people like themselves.

A Race Against Time, a collection of the best articles from 12 years of American Renaissance, represents an unapologetic break with the assumptions and clichés of the civil rights era. The authors believe that when decades of experience do nothing but contradict the assumptions that underlie social policy, those assumptions must be reexamined. America has tried — as earnestly as a nation can try anything — to build a society on the assumption that race can be made not to matter. It is time to recognize failure the authors represented in this book — Samuel Francis, Jared Taylor, Richard Lynn, Michael Levin, and others — reject today’s racial orthodoxy. They are all fully aware that what they propose in its place is no less than heresy against the state religion. It is a religion few people actually live by, but it still has the power to dictate policy, and to terrify and punish scoffers. At its simplest, their heresy is this: Race is important, and whites have rights and interests as a race. 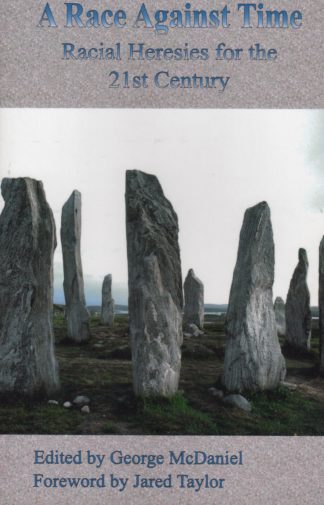 You're viewing: A Race Against Time edited by George McDaniel $16.00
Add to cart