The Religious Attitudes of the Indo-Europeans by Hans F.K. Günther

For a world culture such as progressives seek to construct, an elevation of the spirit above and beyond the entertainment needs of the masses – above Jazz and Negro rhythm – is no longer to be hoped for, since what Europeans and North Americans have to offer today to the ‘undeveloped’ peoples (who, however, should have been able to utilize the 10,000 to 20,000 years which have passed since the end of the Old Stone Age for their own development), is nothing more than the spiritually vacuous ‘culture’ of a welfare state governed by a hundred soulless authorities. “In such societies the Press, literature, radio, television and films and other media provide the masses with a controlled ‘tensioning’ and ‘de-tensioning’ by alternately playing up this or that belief or unbelief. With the further extinction of families capable of spiritual independence, and the further disappearance of talents, particularly among the peoples of North America and Europe capable of spiritual leadership, no alternative to the disappearance of the last remaining elements of the Indo-European peoples and their culture can be expected.

Be the first to review “The Religious Attitudes of the Indo-Europeans by Hans F.K. Günther” Cancel reply 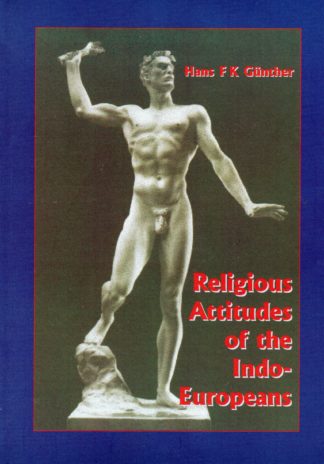 You're viewing: The Religious Attitudes of the Indo-Europeans by Hans F.K. Günther $14.00
Add to cart