The Liberty Incident Revealed by A. Jay Cristol (hardback)

The Definitive Account of the 1967 Israeli Attack on the U.S. Navy Spy Ship

The Liberty Incident Revealed is the complete and final story about the Israeli Air Force and Navy attack on the USS Liberty during the Six Day War in June 1967. Cutting through all of the controversy and conspiracy theories about Israel’s deadly attack, Cristol revises his well-regarded book about the event with an expanded and in-depth analysis of all of the sources, including the released tapes of the National Security Agency (NSA) intercepts.

When Cristol’s first book on the subject, The Liberty Incident, was published in 2002, there remained many unanswered questions about Israeli Air Force audio tapes. The NSA intercepts tapes had not yet been released in 2002. Some conspiracy theorists alleged the NSA tapes would prove that the Israeli attack was premeditated. Cristol’s successful Freedom of Information Act lawsuit against the NSA, while resulting in the release of those tapes, has been greeted by anti-Israel sources insisting that the NSA tapes are fraudulent and are part of a larger conspiracy to deceive the American public.

After a quarter of a century of intensive research in both Israel and the U.S., researching all relevant archives from NSA, CIA and the State Department, reviewing both formerly classified and open-source documents, and interviewing all then-living individuals directly involved in the incident, the factual and documentary record is clear. Cristol maintains that despite the fact that all of the official records and transcripts are now available for review, the truth has proven to be of no interest to those individuals and organizations who are motivated by hidden agendas, wish to keep conspiracy theories alive, or are trying to feed sensational stories to the media. Documenting his findings in six new chapters, Cristol establishes definitively that the Israeli attack was a tragic mistake and presents a convincing argument that will be regarded as the final chapter in the long-simmering debate about this incident.

Be the first to review “The Liberty Incident Revealed by A. Jay Cristol (hardback)” Cancel reply 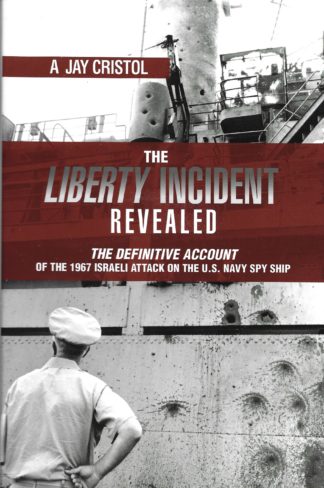 You're viewing: The Liberty Incident Revealed by A. Jay Cristol (hardback) $16.00
Add to cart