A must read for anyone interested in real history, Stalin’s War of Extermination is based on newly released Soviet documents. You think Socialism is not so bad? Read this book. This book documents the total power the Soviet Government had over their own people and how Russians were murdered by the tens of millions by their own government. Stalin’s two big tools were “brutal terror” and “shameless propaganda.” Soviet soldiers were forbidden to surrender in battle because the Soviets feared that those who did surrender would join the Germans in their supposed campaign to destroy Communism in Russia. Thus, all Soviet soldiers who had been captured for any reason were murdered by the NKVD upon their return. Even millions of Russian civilians in areas which were overrun by German forces and then later recaptured by Soviet Armies were killed or sent to the Gulag. All this was nothing to Stalin who had starved 7 to 9 million Ukrainian farmers to death during the government induced famine of 1932-33 (p. 197) and who had purged millions of other Soviet citizens and soldiers. Hand in hand with this terror went endless propaganda. For example, Soviet murders of thousands of Polish officers in the Katyn forest were blamed on the Germans; a lie that was continued up until 1992 when Boris Yeltsin finally released the documents showing the guilt of the Soviet government. (p. 209) To back up these lies, “witnesses” were produced. Author Joachim Hoffman sums the situation up well by stating, “Anyone who did not believe the propaganda experienced the terror.” (p. 331) Think you can rest easy now that Soviet Communism has “collapsed?” Think again. Author Hoffman touches on the complicity of the West with Soviet genocide and crimes against humanity. For example, France and England declared war on Germany supposedly because of Germany’s invasion of Poland. Yet when the Soviet Union also attacked Poland two weeks later and overran the eastern half of the country no one even seemed to notice. The US fought on the same side as “Uncle Joe” Stalin in World War II, a war which had as its main result the enslavement of half a billion people in eastern Europe under Soviet Communism. That is what our soldiers fought and died for. Now look at the US policy toward China today, also a totalitarian Communist country. We are busy sending our manufacturing capacity to China to be worked by slave labor and administered by the same people who butchered the pro-democracy students in Tienaman Square. As the saying goes, “Those who do not study history are forced to repeat it.” Read this book to see the real face of Communism. There are those who call names and scream about this and other books “making excuses for the Nazis”. Be warned that reading this book, particularly the sections about master Soviet propagandist Ilya Ehrenberg, may cause you to see such name-callers in a different, and very unflattering, light. Jim McPherson

Be the first to review “Stalin’s War of Extermination, 1941-1945 by Joachim Hoffmann (Hardback)” Cancel reply 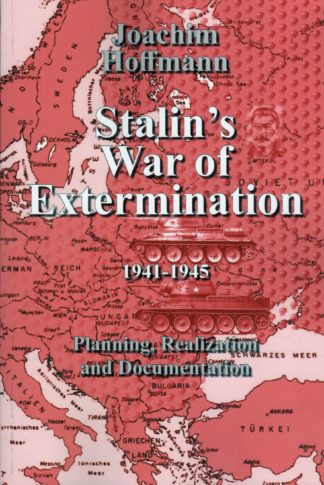