The story of the last world war, as told by Grand Admiral Karl Doenitz himself. His memoir covers his early career with submarines in the First World War and follows both his successes and failures through the Second World War, with great detail on the way the U-boat campaign was waged, as told by the man who invented U-boat tactics.

Doenitz includes details of the U-boat campaigns during the Second World War as well as the opinions, ideas and commentary on the period. Of particular interest are the comments regarding British and American conduct during the war. An important social document, and an invaluable source for any student of the last war.

He became the last Führer of Germany after Hitler’s suicide in May 1945 and the book’s subtitle, Ten Years and Twenty Days, is a direct reference to the time Karl Doenitz spent in Spandau Prison having been convicted of war crimes following trial at Nuremberg.

Be the first to review “Memoirs by Karl Doenitz” Cancel reply 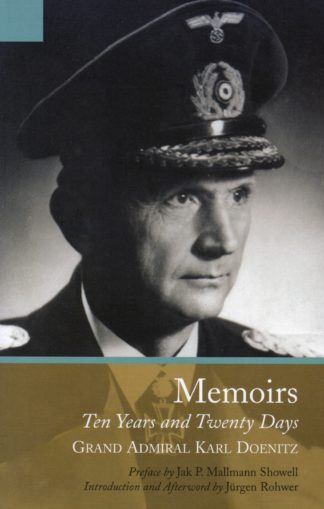 You're viewing: Memoirs by Karl Doenitz $25.00
Add to cart