On May 7, 1915, toward the end of her 101st eastbound crossing, from New York to Liverpool, England, R.M.S. Lusitania-pride of the Cunard Line and one of the greatest ocean liners afloat-became the target of a terrifying new weapon and a casualty of a terrible new kind of war. Sunk off the southern coast of Ireland by a torpedo fired from the German submarine U-20, she exploded and sank in eighteen minutes, taking with her some twelve hundred people, more than half of the passengers and crew. Cold-blooded, deliberate, and unprecedented in the annals of war, the sinking of the Lusitania shocked the world. It also jolted the United States out of its neutrality and hastened the nation’s entry into World War I.

In her riveting account of this enormous and controversial tragedy, Diana Preston recalls both a pivotal moment in history and a remarkable human drama. The story of the Lusitania is a window on the maritime world of the early twentieth century: the heyday of the luxury liner, the first days of the modern submarine, and the climax of the decades-long German-British rivalry for supremacy of the Atlantic. Above all, it is the story of the passengers and crew on that fateful voyage-a story of terror and cowardice, of self-sacrifice and heroism, of death and miraculous survival.

Be the first to review “Lusitania: An Epic Tragedy by Diana Preston” Cancel reply 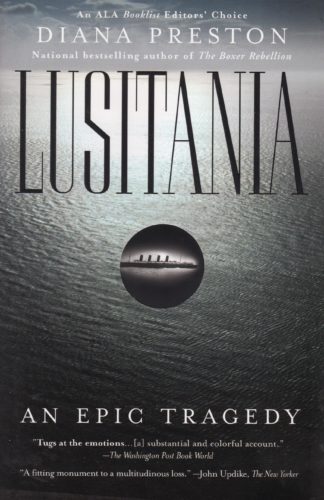 You're viewing: Lusitania: An Epic Tragedy by Diana Preston $10.00
Add to cart