In Perfect Formation offers a unique analytical investigation of the ideology and training institution that defined the education and training program for SS officers. Author Jay Hatheway, who during the 1970s was stationed at Flint Kaserne, Bavaria, the former SS-Junkerschule Tölz, includes extensive references to original source material on the underlying SS principles of blood, soil, and struggle as they were formalized in SS ideology. In support of his intricate linkages between ideology and its realized form, Hatheway has obtained over 90 previously unpublished photos of the SS officer training academy Tölz. More than a series of buildings, the structure of the Junkerschule was itself a metaphor for the subset of Nazi ideology that was developed by Himmler, Darré and others to create a racially pure vanguard to lead Germany on its path toward Teutonic regeneration. 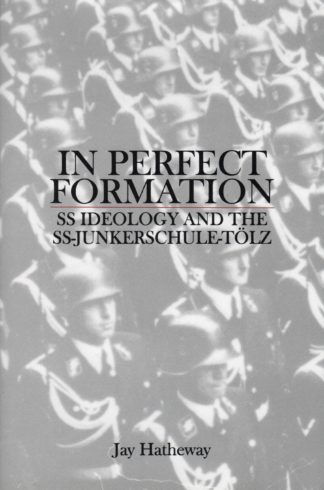 You're viewing: In Perfect Formation by Jay Hatheway (Hardback) $24.00
Add to cart