In Final Defense of the Reich by Stephen M. Rusiecki (Hardback)

The Destruction of the 6th SS Mountain Division “Nord” – Illustrated

In April 1945, the American 71st Infantry Division exacted the final vestiges of life from the Reich’s 6th SS Mountain Division in central Germany. This analysis of the battle demonstrates that the Wehrmacht’s last gasp on the Western Front was anything but a whimper as some historian’s charge. Instead, Stephen Rusiecki argues, the Nazis fought to exact every last bit of pain possible. The book follows the histories of both the German and American divisions from their inceptions until their fateful confrontation and serves as a testament to the human experience in war, from the perspective of the soldiers and the civilians who suffered the brunt of the fighting.

Be the first to review “In Final Defense of the Reich by Stephen M. Rusiecki (Hardback)” Cancel reply 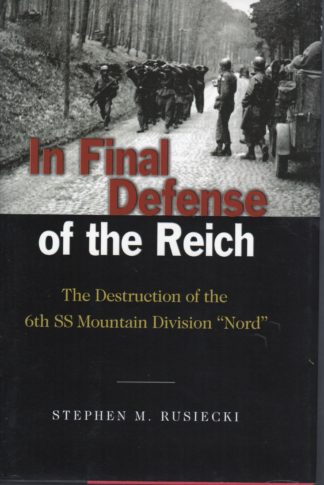 You're viewing: In Final Defense of the Reich by Stephen M. Rusiecki (Hardback) $24.00
Add to cart