The Sturm Abteilung der NSDAP (SA, assault battalion of the Nazi party) created in August 1920 were squads of strong arms intended to protect the Nazis meetings, to provoke disturbance, to break up other parties meetings, and to attack and assault political opponents as part of a deliberate campaign of intimidation. After 1925 the name Braunhemden (Brownshirts) was also given to its members because of the colour of their uniforms. Under the leadership of Hitlers close political associate, Ernst Rhm, the SA grew to become a huge and radical paramilitary force. This book answers several questions concerning the SA. How did the SA become a national movement? What was the relationship between Rhm and Hitler? What role did the SA play in providing Hitler with the keys to power? After the seizure of power by the Nazis on January 30, 1933, what was the function of the Brownshirts? Why did the brutal and scandalous Ernst Rhm stand in Hitlers way? What became of the SA after the bloody purge of June 1934, the notorious Night of the Long Knives? 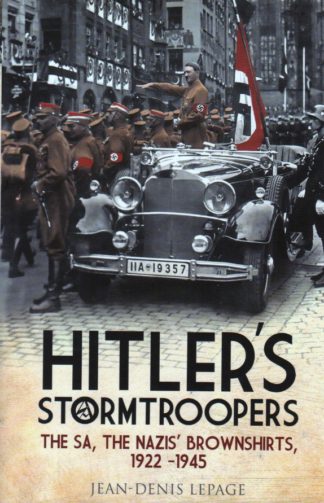 You're viewing: Hitler’s Stormtroopers by Jean-Denis Lepage $20.00
Add to cart