History of the Jews by Eustace Mullins

Throughout the history of civilization, one particular problem of mankind has remained constant. In all of the vast records of peace and wars and rumors of wars, one great empire after another has had to come to grips with the same dilemma… the Jews. Despite the persistence of this problem, and despite the enormous amount of literature on this subject, not one writer, either pro or con, has ever faced the dilemma at its source namely, who are the Jews and why are they here? This question can be answered only if man brings to bear upon it his full intelligence. This question must also be approached on the highest spiritual level, with the deepest motives of Christian charity, and above all, with the greatest respect for man himself, what he is, what his roots are, and what he is becoming. The history of man is the history of conflict, of wars between the haves and the have-nots, of exploitation of man by man, and of terrible massacres. In this blood-stained record, however, the scholar finds only one people who have aroused the most violent antagonisms, no matter where they have settled. Only one people has irritated its host nations in every part of the civilized world to the point that the host has turned against them and killed them or driven them out. These people are called the Jews. 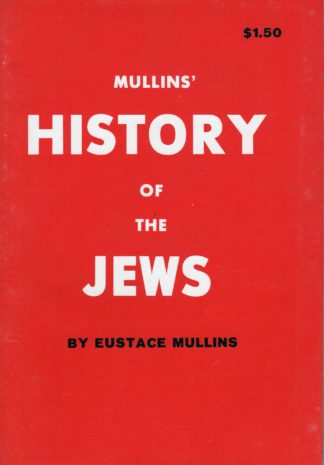 You're viewing: History of the Jews by Eustace Mullins $25.00
Add to cart