Heredity and Humanity by Roger Pearson

Race and heredity were accepted facts in Western science until Marxists and fellow travelers infiltrated Western academe and subverted objectivity on the subject. Yet notwithstanding the fact that contemporary scientists are influenced by fear that politically motivated criticism might affect their careers, and in some cases simply by the fear that their research might raise racial tensions, the evidence for inherited differences in both physical (as evidenced in sports) and mental abilities is now substantiated. “Political correctness,” a euphemism for politically motivated suppression of the truth, still seeks to obfuscate the findings of science, but must eventually lose its grip as scientific research, which began with twin studies, DNA, blood groups, and is now represented by the Human Genome project, increasingly reveals the significant role of heredity and distinctive descent groups on human affairs. Contents: The Concept of Heredity in the Ancient World; The Discovery of Evolution – Eugenics and the Pioneers of Modern Science; Eugenicists as Conservationists; Race as a Nation-Building Ideal; Radical Egalitarianism Penetrates Academe; Egalitarianism Ascendant – Marxism Strengthens the Anti-Hereditarian Cult; Media and Academic Persecution of “Hereditarian” Scholars; Twin Studies, Blood Group Research and Modern Genetics; DNA Analysis and the Racial History of Man; Eugenics and Modern Medical Science; Genetics and the Future of Humankind. 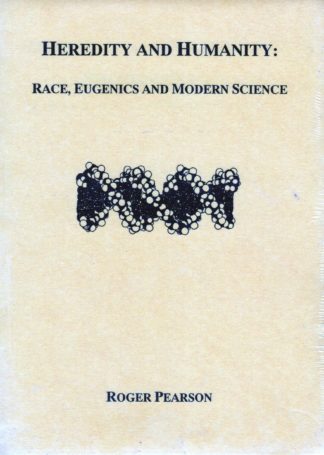 You're viewing: Heredity and Humanity by Roger Pearson $25.00
Add to cart