Oswald Mosley was an English aristocrat who made his mark on British politics as the founder and leader of the British Union of Fascists. A man of intellect and determination, he rebelled against the establishment of his day. He rejected the authority of those who he believed acted not as shepherds of their people but their false friends, decrepit and slinking middle managers for international capital and finance.

James Drennan’s B.U.F. Oswald Mosley and British Fascism is an internal history of the British Union of Fascists which describes Mosley’s dramatic journey across the English political spectrum, culminating at the formation of Britain’s foremost Fascist movement. It delves into contemporary politics, condemning the political class with dry, acrid wit; and into English history, describing the ruin brought by the rise of capitalism and democracy. Drennan describes Fascism as a spiritually “pan-European movement,” representing equally “an economic revolt against the obsolete capitalist system, and a spiritual reaction against the materialist and internationalist concepts of Marxism.” It was, in his analysis, the heroic challenge of the men of his age to the “pessimism” of Spengler, an elite effort of the European civilization to overcome its prophesied twilight and create a new and better world. The fact that in 1934 such predictions could be made, dazzling in their unalloyed hope and confidence, appear all the more tragic in hindsight, but the legacy of the men described in this book will not be forgotten

Be the first to review “BUF: Oswald Mosley and British Fascism by James” Cancel reply 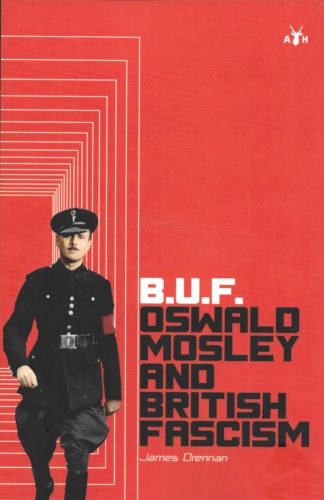 You're viewing: BUF: Oswald Mosley and British Fascism by James $16.00
Add to cart