America in Vietnam: The War That Couldn’t Be Won by Herbert Schandler

This controversial and timely book about the American experience in Vietnam provides the first full exploration of the perspectives of the North Vietnamese leadership before, during, and after the war. Schandler offers unique insights into the mindsets of the North Vietnamese and their response to diplomatic and military actions of the Americans, laying out the full scale of the disastrous U.S. political and military misunderstandings of Vietnamese history and motivations. Including frank quotes from Vietnamese leaders, the book offers important new knowledge that allows us to learn invaluable lessons from the perspective of a victorious enemy.

Unlike most military officers who served in Vietnam, Schandler is convinced the war was unwinnable, no matter how long America stayed the course or how many resources were devoted to it. He is remarkably qualified to make these judgments as an infantry commander during the Vietnam War, a Pentagon policymaker, and a scholar who taught at West Point and National Defense University. His extensive personal interviews with North Vietnamese are drawn from his many trips to Hanoi after the war. Schandler provides not only a definitive analysis of the American failure in Vietnam but a crucial foundation for exploring the potential for success in the current guerrilla wars the United States is fighting in Iraq and Afghanistan.

Be the first to review “America in Vietnam: The War That Couldn’t Be Won by Herbert Schandler” Cancel reply 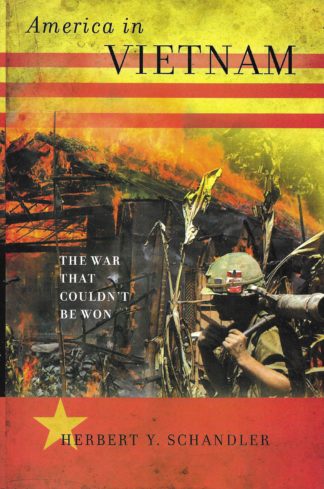 You're viewing: America in Vietnam: The War That Couldn’t Be Won by Herbert Schandler $30.00
Add to cart